This aerial view from 1962 shows the Amherst College campus
and portions of the town. The main quadrangle, bordered on the west by College
Row, is visible in the upper left corner. Tennis courts and athletic playing fields are
on the right. The Merrill Science Center, home of the Keefe Science Library, was
not built at the time the photograph was taken.

This statue of Noah Webster, one of Amherst's founders, was presented
to the College in 1914 by Richard Billings (AC 1897). Originally located
at the end of a long avenue of maples leading from the east side of Johnson
Chapel to Stearns Church, the statue is now located on the north side
of the Robert Frost Library. 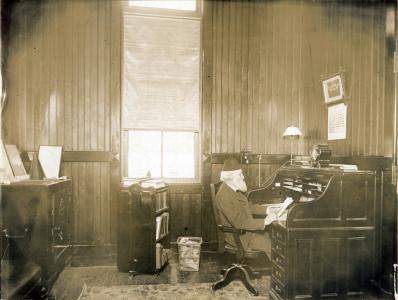 The son of Amherst College President Edward Hitchcock and Orra White Hitchcock, Edward Hitchcock, Jr., was born in 1828, three years after the College received its charter. He graduated from Amherst with the Class of 1849, and after receiving an M.D. from Harvard Medical School, returned to Amherst, where he served on the faculty as Professor of Hygiene and Physical Education for fifty years, beginning in 1861. Affectionately known as "Old Doc," he also served as the college physician and as de facto collector of Amherst College history.

One of Doc's farsighted projects was to gather together the "raw materials" of the history of the College, into what was known as the Memorabilia Collection. Begun in the 19th century, this collection became the foundation of today's Amherst College Archives and Special Collections.

Morgan Library served as the College's library from 1853 until 1917, when Converse Library was erected. Known as the College Library when it was dedicated in 1853, it was renamed for Henry T. Morgan in recognition of a bequest from his estate used to renovate the building. This room on the second floor served as a reference and reading room.

This reading room was created in 1935, in response to student concern, to alleviate the overcrowding in Converse Library that resulted from a growing collection and an increased enrollment of the College. Located on the third floor of Williston in the former Mather Art Gallery, the reading room retained the friezes and relief panels that had been part of the gallery's decorations. The room seated 128, thereby doubling the reading room capacity of the College at the time. President Stanley King, in a special interview, stated: "The College is indebted to the Amherst Student for bringing forcibly to our attention the congested conditions in the Converse reading room."

Drawings and photographs were used as visual teaching aids in the 19th century. This photograph from 1888 shows the classroom in Williston Hall where Professor Richard H. Mather (AC 1857) taught Greek. Professor Mather also lectured in Art History and illustrated his Greek and art lectures with the photographs of classical sculpture hung around this room and the casts of classical sculpture that were in the art gallery upstairs.

The school of library economy, known as the Fletcher Summer Library School, offered professional education for librarians on the Amherst College campus each summer from 1891 until 1905. Here, William I. Fletcher, librarian of Amherst College from 1883 until 1911, sits in front of Morgan Library, surrounded by students enrolled in the 1892 session. In the Amherst tradition, Fletcher's curriculum included both intellectual and physical exercises.

Impressively attired in formal caps and gowns, Seniors indulge in a bit of frolicking during the 1910 Commencement activities. This traditional game of leap frog was called "Gambol on the Green."

Seniors gather in front of Johnson Chapel before Senior Assembly in 1995. Dedicated in 1827, Johnson Chapel was built to house the chapel, library, museum, laboratory, and recitation rooms. It was named for Adam Johnson of Pelham, whose bequest funded the construction. Renovated several times during the last century, Johnson Chapel continues to serve as an important symbol of the "College on the Hill."

This turn of the century student room belonged to Arthur Vinton Lyall (AC 1900), which he shared with a roommate in the Chi Phi fraternity house. It was a little more ornate than student housing today, as these two views show: photographs, memorabilia, cooking paraphernalia, and even athletic equipment were used to personalize the room.

The equatorial telescope was added to the Lawrence Observatory in 1854, though the Octagon, which included the Observatory and Woods Cabinet, was completed in 1847. While the Octagon's major proponent, College President Edward Hitchcock, was pleased with the architectural innovation of this science building, some members of the community were scandalized by its octagonal shape. This equatorial refractor served the educational and research purposes of the College until it was dismantled and replaced by modern equipment when the new College Observatory was completed in 1905.

Dean of Admission Eugene "Bill" Wilson (AC 1929) played many roles at Amherst. Once described as a "jeep with a sixteen-cylinder Cadillac engine," he was known for his sense of humor and his genuine interest in the welfare of each student. In addition to his duties in the Admission Office, at various times Dean Wilson also served Amherst as Alumni Secretary, teacher of English, Secretary to the Board of Trustees, and avid sports fan. Here he films a Commencement baseball game in 1940.

Burgess Meredith Brings The Art of the
Motion Picture to Campus, 1947

Amherst College President Charles W. Cole (AC 1927) and F. Curtis Canfield (AC 1925), Professor of Dramatic Arts and director of Kirby Theater, discuss with Burgess Meredith (AC 1931) his gift to the College of "complete sound motion picture production units." Meredith, known for both his stage and screen performances, had spoken at the 1939 dedication of Kirby Memorial Theatre. He presented this gift to the college in 1947 so that Amherst students could study the art of the motion picture.

On Sunday, April 3, 1949, the Amherst College Masquers, an honorary undergraduate dramatic organization, made television history. NBC broadcast the entire performance of Julius Caesar to 14 cities nationwide, marking the very first time in history that an entire play of William Shakespeare's was televised. Arranged by then network vice-president Charles R. Denney (AC 1933), this performance of Julius Caesar also marked the first use of the Elizabethan Playhouse in the Library and the first production of the play in the Elizabethan format. The play featured about fifty students in the cast and stage crew and was directed by F. Curtis Canfield (AC 1925), Professor of Dramatic Arts and director of Amherst's Kirby Theater.

When U.S. President John F. Kennedy spoke at the groundbreaking for the Robert Frost Library on October 26, 1963, it was a major media event. An entire room was set aside just for media personnel. This photograph shows cameras and other media equipment set up on scaffolding in the Cage to record the Convocation honoring the President, which took place before the ground-breaking ceremonies.

Dissection for the Fun of Learning, 1884

Members of the 1884 Junior biology class pose with their carefully dissected cats. At the time, all work in the department of biology was optional; teaching the subject was tolerated, but not really approved. Professor John M. Tyler (AC 1873) and his students worked in a rented room off campus where they dissected specimens for the fun of learning, since Amherst did not provide any laboratory space on campus. Of the seven members of the Class of 1886 pictured in this biology class, five became surgeons.

Geology has had a major place at Amherst since the days of geologist and President Edward Hitchcock. Field trips were an important part of the 19th century science curriculum. This student trip to an asbestos mine in about 1890-1891 was chronicled by Robert Ludington (AC 1891), who was also an amateur photographer. The hammers and other tools of the trade are prominently displayed in the photograph.

The study of chemistry has long been a part of Amherst's curriculum. As early as 1857 the Trustees were seeking funds for "rooms convenient...for chemical purposes." Originally taught in the basement of Johnson Chapel, chemistry was later taught in the northern half of Fayerweather Laboratory, after it was completed in 1894. Here students in the Class of 1916 pose with Professor Arthur J. Hopkins (AC 1885) in the "state-of-the-art" chemistry laboratory.

Professor Bruce Buzzell Benson (AC 1943), who always signed his initials B3, taught physics at Amherst from 1947 to 1990. Called "a dedicated teacher whose lectures and direction of student work were characterized by rigor, clarity, and attention to detail," Professor Benson was well known for both his gentle nature and his insistence on maintaining the highest standards of performance. Here, Professor Benson demonstrates a Phillips x-ray spectrometer to students in his physics laboratory in Fayerweather.

As a result of the rapid growth of post-war physical research, the physics programs of many undergraduate institutions suffered professionally after World War II, as funding tended to be diverted to and concentrated in larger universities and research centers. Amherst was widely recognized as one of only a few small liberal arts colleges of that time, and for decades after, whose physics departments could compete with university undergraduate schools in training potential physicists, by providing a comparable curriculum, greater opportunity for in-depth research, and state-of the-art equipment. Here, Tycho Tor von Rosenvinge (AC 1963) uses an oscilloscope to test an experimental electronic device.

Young visitors are enthralled by the mastodon bones on display in the Pratt Museum. Built in 1884 as a gift of Charles M. Pratt (AC 1879), the Pratt Gymnasium was remodeled in 1950 for the Geology Department and the natural history collections. President Edward Hitchcock obtained the College's original mastodon skeleton in 1854, from M. Krantz, an "extensive mineral dealer in Bonn, on the Rhine."

Amherst's earliest orchestra was established in 1861. Here the seven-piece College Orchestra for 1872-1873 poses in front of the College Church. The orchestra for this season contained two first violins, two second violins, one double bass, a flute and a cornet, played by one freshman, two juniors and four seniors. Following in the footsteps of the first orchestra and in the tradition of the College's appreciation of fine music, the orchestras were asked to play at many events open to the College and the greater community.

Known as the "Singing College" by the 20th century, Amherst students have had a long tradition of interest in music and song. Chroniclers of the 19th century have noted that "the best musical talent of the various classes...has centered in their Glee Clubs." Over the years, the different Glee Clubs often gave concerts in neighboring towns and cities. Here the College Glee Club sits on the steps of Johnson Chapel during their 1876-77 season. The large tuning fork, prominently held for the camera, identifies them as a musical group. Posing for the camera, the students also carry the canes and wear the hats that identify their class year.

The five members of the Orphæn Quintette pose for a formal portrait in 1876, holding sheet music and a tuning fork. The musical talent at Amherst at the time was described as excellent, and students frequently gave public concerts which "won for themselves and the College no little renown." Pictured left to right, are D.H. Colcord, second bass, H.S. Johnson, first tenor, J.D. Willard, second tenor, W.W. Sleeper, first bass, and Edward Ayres, second bass, all members of the Class of 1878.